The story continues! “Soolie Beetch and the Hungry Souls,” the second book in the Dead Souls Trilogy is set to release on Sept 15th, 2022.

Available on Amazon for print and Kindle.

The 2nd edition of “Soolie Beetch and the Dying Light” is now available for purchase on Amazon for print and Kindle. This edition features a forward by the author, new edits, and their true name on the cover.

Book two in “The Dead Souls Trilogy” is set to release later in 2022!

A note from Skelly Harrington:

When I changed my name from Gypsie Raleigh, I amputated a wealth of online currency, press, and global traction that my book and art had been fortunate enough to garner. It was an incredibly painful—but necessary—decision. At the time, the name Gypsie was the only name I felt I had ever had friends under. The name Skelly, however, has come to mean even more.

I chose the name ‘Skelly’ for myself. It is Irish and Gaelic for ‘storyteller,’ which is what I both compulsively and intentionally strive to be in all of my passions. It is a gender neutral name that is not associated with any people group to which I do not belong, it is without any religious baggage, and it abbreviates to ‘Skel,’ the name I am known by to my friends.

It is also the name under which I met my wives and became legally and joyously married. It is a name of love and self love, of renewal, and of my future.

And now it is the name under which I proudly release The Dead Souls Trilogy.

I hope that you read “Soolie Beetch and the Dying Light” if you haven’t read it before, and consider rereading it in anticipation of the second book “Soolie Beetch and the Hungry Souls” coming soon! And if you are able to review it to help rebuild some of that currency that has been lost, it would mean the world to this earnest devoted storyteller.

Thank you for reading,

The 2nd Edition of “Soolie Beetch and the Dying Light” is on its way!

This Edition will feature a forward and new revisions by the author. As well as their *true name.*

Many of you know that Skelly Harrington published their first book under their dead name, so it was important—now with the second book in the pipeline—to re-release the original.

Revisit the start of the trilogy just in time before Soolie Beetch comes back in “Soolie Beetch and the Hungry Souls” later this year, 2022!

“Soolie Beetch and the Dying Light” has been featured on literary podcast, “Cracking the Spine!”

“Not what I expected…30 or 40 pages in, in my head, I was like, ‘I can kind of see where this is going,’ and I was wrong…It does not read like a first novel, it reads like someone who is accomplished. ”

This is such a fantastic mention. Thanks to the crew of “Cracking the Spine” for reading and supporting independent authors. Check it out.

Gypsie guested on the PageBacon writers podcast! Listen to the episode to hear her read a selection from the book, discuss past works, her process, and the future of Soolie Beetch.

I’m thrilled to announce that Soolie Beetch and the Dying Light is now available from Amazon!

You can read it on any device, even if you don’t own a Kindle.

The book also makes a great holiday gift and stocking stuffer for all the readers you know.

Thank you SO much for all of your support. I hope you love the story! 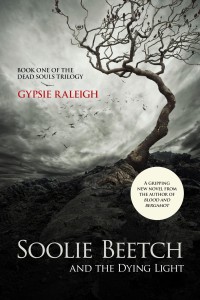 It’s here! The cover of Soolie Beetch and the Dying Light has finally been revealed:

Get Excited – Soolie Beetch is coming in November, 2015.